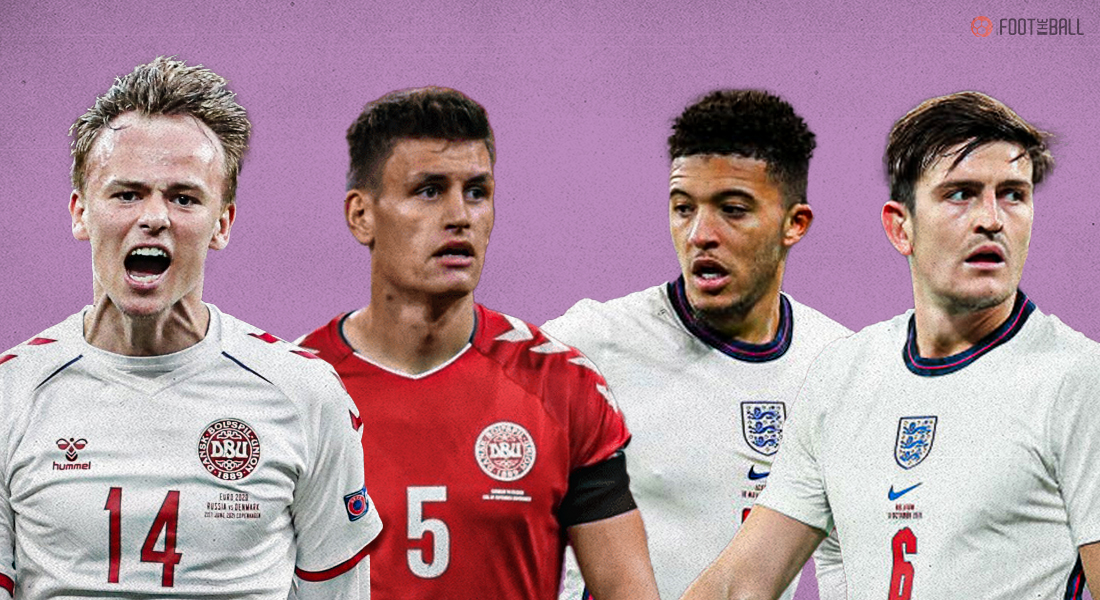 With the quarterfinals done and dusted, Euro 2020 moves into its semi-finals, starting off with a high-profile clash between Italy and Spain on Tuesday at Wembley in London. 24 hours later, a mouth-watering clash awaits at the same venue as heavyweights England face off against a spirited Denmark in the other semi-final fixture.

England, one of the pre-tournament favourites mainly due to the amount of talent their squad possessed, have been criticised for their defensive style of play but manager Gareth Southgate has silenced all of them with a near-flawless campaign, who have not conceded a goal yet in the whole tournament.

Their 2-0 win over Germany in the Round of the 16 showed a sense of grit and determination as they held their fort against a supremely talented German side while they showed their ruthlessness against Ukraine as they went on to bulldoze the Zbirna 4-0 in the quarterfinal.

Denmark, on the other hand, have superbly turned their lows into highs and have become everyone’s second team with their inspiring performances since the unfortunate incident involving their Christian Eriksen in the first group stage game.

Since then, they demolished Russia 4-1 in the last group stage game, continued the same into the Round of 16 fixture where they recorded a 4-0 win over Wales and showed the fortitude they were known for in the quarterfinal against the Czech Republic as they reached the semi-final with a hard-fought 2-1 win.

And although the Three Lions go into the tie as the favourites, the match will certainly be a tight affair and we, at FootTheBall, have compiled three key individual matchups which can significantly impact the outcome of the game on Monday.

One of the players in-form for Denmark, Mikkel Damsgaard has taken the mantle of being the chief creator in this Denmark side in Christian Eriksen’s and has exceeded the expectations of every viewer with his dazzling performances.

Although he did not manage to have a direct impact for Denmark in the quarterfinal against the Czech Republic, he showed another side to his game, by running in behind defenders and latch on passes from deep, which can be dangerous for the left-side of England, and more importantly Harry Maguire.

The Manchester United captain has been a colossus in the back for England and will be buzzing with confidence after scoring a goal against Ukraine. But he and Luke Shaw should be aware of the threat Damsgaard poses on their side of the defence.

Aerially, there is no better defender than Maguire in this tournament, tackling Damsgaard’s skills and tricky feet will be the test for Maguire, and his defence as one wrong move could prove costly for England.

With rumours regarding his future increasing as the Euros started, it looked like Harry Kane was carrying a burden on his shoulders as he was not able to score even once in the three group stage matches.

He finally broke the drought by scoring the second goal in the 2-0 win over Germany in the Round of 16 and went on to score another two against Ukraine and has not only rejuvenated himself but also the hopes of the squad and its fans as they now have their talisman fit and firing at the right moment.

And stopping the England striker from having an impact lies on the shoulders of the entire defence of Denmark but more so on their captain Simon Kjaer. The AC Milan defender has been a true leader in every sense since the start of the tournament and will have to bring out the same against England as he will need to marshal his defence with full concentration.

With Kane not being the typical, physical number 9 as he tends to drop deep and connect the play, Kjaer will need to be in the right mindset of when to drop and when to hold his line. Because, if there is a mistake, the other attackers of the England squad are more than capable of punishing within seconds.

After getting his first start in the quarterfinal against Ukraine, Jadon Sancho looks certain to keep his place ahead of Bukayo Saka, the man whom he replaced as he was suffering from a knock. The performance displayed by the newly signed Manchester United winger, was noteworthy as he was a thorn in the Ukrainian defence as he shifted flanks at will and drove forward with intent.

But on Wednesday, he will need to control his forward-thinking a bit and help right-back Kyle Walker deal with a flying Joakim Maehle, who has probably been the player of the tournament for Denmark.

The Atalanta star who is predominantly a right wing-back has featured for the Danes on the opposite flank and produced performances that can be seen as game-changers in the team’s victories.

On Wednesday though, he will have to do a bit more defending than usual as he faces off against Sancho on the left-side on the defence of Denmark and there aren’t many tricky wingers than the England superstar. Maehle needs to be aware of when to venture forward and will certainly need the support of Jannik Vestergaard, but his attacking outputs might be enough to shadow his defensive side.