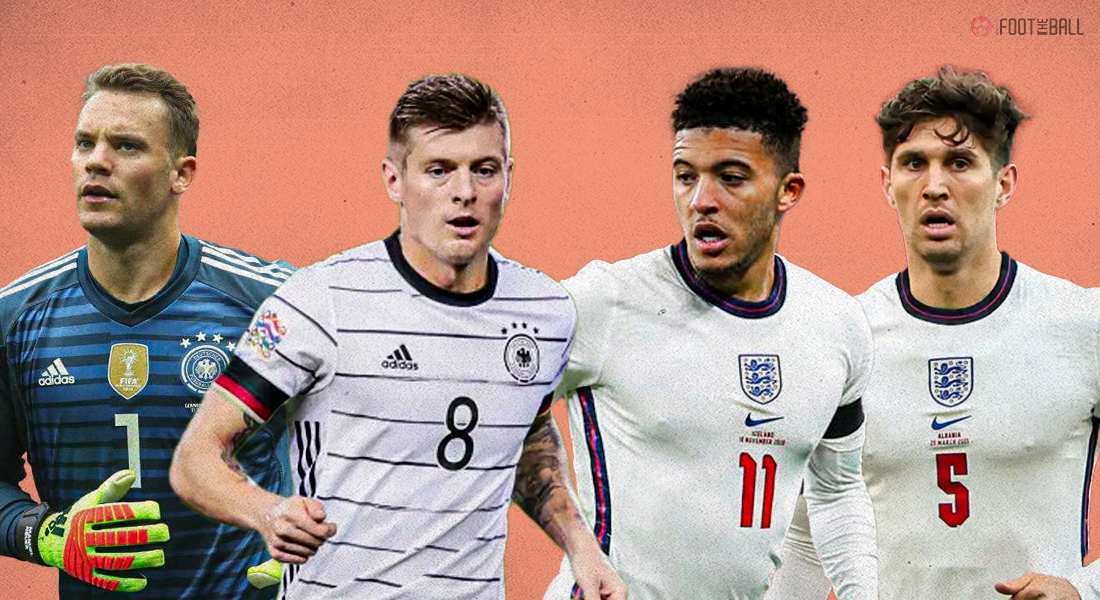 A blockbuster fixture awaits us on Tuesday, June 29 when England takes on Germany in the Round of 16 fixture and two of the most talented European sides collide at an early knockout stage. The match will be a treat for the 40,000 permitted spectators at the Wembley Stadium in London.

Both sides have been underperforming despite the influx of young exquisite talents but look like they’ve finally found their groove coming into the knockouts and it is tipped to be a great watch.

🏴󠁧󠁢󠁥󠁮󠁧󠁿 All smiles in the England camp 😃

As Gareth Southgate and Joachim Loew continue to scratch their heads over the perfectly balanced XI which can get them the win and take them to the quarterfinals, we, FootTheBall, bring you the Combined XI from England and Germany’s squads based on their form at Euro 2020 and overall ability.

The German number 1 since 2010 and current captain Manuel Neuer has been one of the best goalkeepers of this generation and certainly the most decorated. He hasn’t been able to keep a clean sheet in the tournament so far unlike his counterpart who kept three, but his leadership and ability to sweep up the pitch and help his team out in dangerous situations edge him over.

The 35-year old Bayern Munich goalkeeper will again be crucial for Germany to intercept English forwards barging into his box. His distribution and reflex action saves have earned him global recognition and also the nickname of “Neuer The Wall”.

Preferably a midfielder, Joshua Kimmich is a proper utility player with both attacking and defending qualities and is playing as a right-wingback for Germany as he sometimes does for his domestic club Bayern Munich.

The 26-year old has done a brilliant job as an attacking wingback, constantly running up and down the pitch for the whole of Germany’s three games. His stamina is backed by the physicality that allows him to take on opponents with ease. Kimmich has made two assists in three games with a passing accuracy of 86%. He has discharged his defensive duties too, making eight ball recoveries and two tackles. The German international ran a whopping 34 kilometres in the process.

He will be lined up against Luke Shaw and possibly Raheem Sterling and it won’t be easy doing both attacking and defending, but if it is to be done, then Joshua Kimmich is the man for it.

Manchester City’s title-winning side was blessed with a rejuvenated John Stones who has remained a rare constant starter for Gareth Southgate’s team in Euro 2020.

The 27-year old centre back has helped his team keep three clean sheets so far with his brilliant defensive cover. Apart from his defensive adeptness, Stones is also a good passer of the ball, a trait that got him shortlisted by Pep Guardiola. He made 193 passes with a 93% passing accuracy and helped his team resist pressure in difficult situations.

Stones will need to be on his toes against Germany when the likes of Serge Gnabry and Kai Havertz make frequent attacking runs in the English box.

Hummels returned to the national side after three years on the back of a brilliant domestic season that saw his team lift the DFB Pokal trophy. After an unfortunate own goal against France put him under the shadows, Hummels bounced back and helped his side get past the group stages. Germany’s high pressing game often exposes them to counterattacks and they conceded five in the process but Hummels in the centre of the back three has kept performing at the level expected of him.

The 32-year old made 22 ball recoveries and 10 clearances in three games and averaged a passing accuracy of 97%. Hummels covers up for his lack of pace with his game-reading ability and strength in both aerial and ground duels.

The Atalanta left-wingback Robin Gosens has been brilliant for his domestic side, making 38 goal involvements since the start of the 19/20 season. The 26-year old has carried this form to his national side and made the most of the opportunity. He was crucial in the match against Portugal with two assists and a goal in the 4-2 win.

He has made full use of the attacking freedom allowed in Germany’s 3-4-3 system and constantly pokes the opponent from the left flank, allowing Kai Havertz to move inside the box and play as a second striker. The German International has had 83% passing accuracy and also made nine ball recoveries and six tackles in Euro 2020 so far.

Gosens will need to track back more when England bursts forward and help his defence in containing the skilful English forwards.

The Leeds United central midfielder has found his way in the England starting lineup ahead of Jordan Henderson based on a revealing debut season in the Premier League. Kalvin Phillips is a proper box-to-box midfielder who can kickstart attacks for his teams with his ball progression and passing ability and also disrupt opposition attacks when possession is lost.

The 25-year old was turned into a defensive midfielder under Marcelo Bielsa and caught the attention of Gareth Southgate with his defensive prowess added to his offensive traits. He covered an average of 11kms per game and assisted Raheem Sterling’s winner against Croatia.

The English midfielder made nine ball recoveries and six tackles in the three games and kept a pass success rate of 88%.

Germany’s engine and midfield maestro Toni Kroos has been performing at the top level for the national side since his debut in 2010 and was crucial in the 2014 World Cup triumph for Joachim Loew. Kroos has solidified his position in the team ever since and produced some of the best performances in the famous white jersey. The 31-year old made 10 assists for Real Madrid in an underwhelming season as the Los Blancos went trophyless.

He has done well for Die Mannschaft at Euro 2020 despite no direct contributions to the goals. Kroos is running the show in midfield with 288 successful passes at a rate of 92%, and also made 7 tackles and 18 ball recoveries for his side.

His creativity will be required more against defensively more organised England as it has turned out difficult breaking them down.

One of the major absentees so far from England’s starting lineup has been the Borussia Dortmund sensation, Jadon Sancho. After making 20 assists for his club for a third straight season, he was expected to be a sure-shot starter on the right flank for the Three Lions, but his absence hasn’t hindered England’s progress so far.

Sancho is one of the brightest young talents in the world and his services are being sought by many top teams across the top five leagues. His services might be required now that the match is against his colleagues from Germany and he has played three full seasons in the Bundesliga.

Muller, alongside Hummels, has returned from exile after three years and made headways into the starting lineup straightaway orchestrating the attacks in a free role in and around the box. Muller helps his team with his off-the-ball movement and allows his forwards to find spaces in dangerous areas. The 31-year old helps out his midfielders in tracking back and building attacks with his short passing prowess.

Another successful season with Bayern Munich saw him assist 18 and score 11 goals in 31 appearances. While he hasn’t been able to bring out similar numbers at Euro 2020 so far, his experience will come in handy in panic situations.

The 22-year old Chelsea star who led his team to Champions League glory scoring the winning goal has lit up the German attack with his stinging pace and dribbling ability. He scored two important goals in the group games against Portugal and Hungary, which helped his side qualify for the Round of 16.

His contribution to the team hasn’t gone unnoticed and there’s a lot of praise heaped on the young shoulders. He can become a national superstar if he can display similar performances against England.

Nickname ‘Hurricane’ for always turning out to be a calamity for the opponents, the Tottenham Hotspur striker has had an unexpected goal drought at Euro 2020. The 27-year old forward could only make five attempts on goal and converted none despite starting all three games. He is frequently dropping deep to help build attacks like he did at Tottenham this season and got the best goals and assists tally in the league.

Top of the group, unbeaten and yet to concede. Job done in the group. 🦁🦁🦁🏴󠁧󠁢󠁥󠁮󠁧󠁿 pic.twitter.com/OZDPSk7qX8

His silence has given voice to his doubters and despite all the criticism, he is still one of the finest strikers in the competition based on his ability to turn matches on his own. The England captain will need to turn around this form if his team is to go through to the quarter-finals.