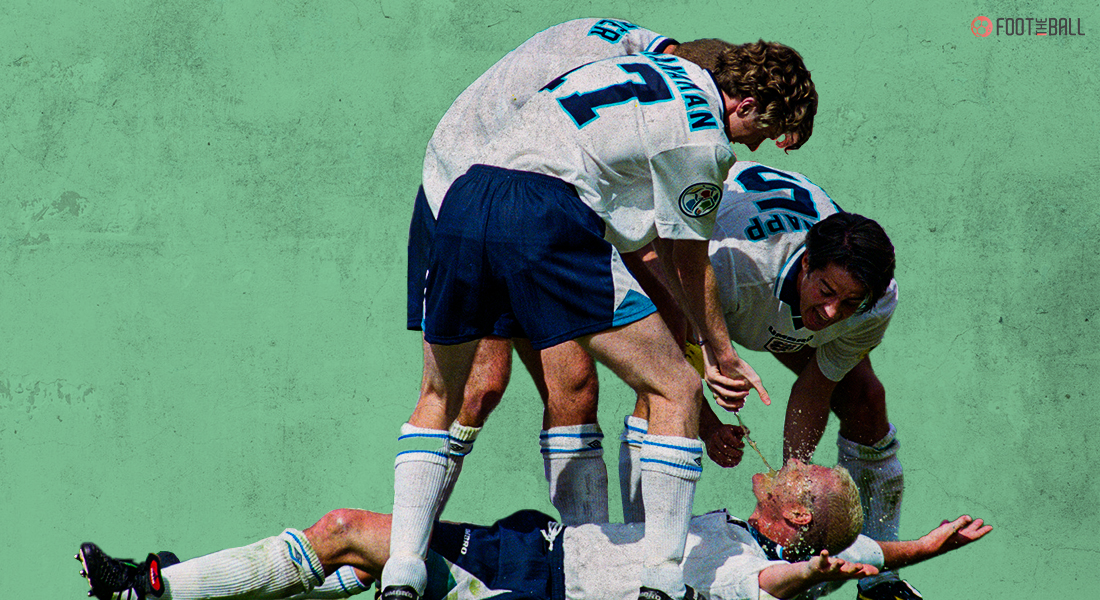 Euro 1996, held in England, had many magical moments. The tournament was seen as the occasion of football coming home. It almost lived up to the billing as the hosts England went as far as semis. They had stalwarts like Alan Shearer, Steve McManaman and Teddy Sheringham along with a certain Paul Gascoigne. A legendary Gascoigne and his celebration at the Euro 1996 stoodout.

Another great England memory #OnThisDay back in 1996.

Who could forget Paul Gascoigne's 'dentist chair' celebration after that wonderful goal against Scotland in the Euros?#ENG #Euro96 pic.twitter.com/PQGuULNYkW

The England team was criticized by the media just before the Euros. They were under pressure to perform and win big. Heartbreaks from the past were playing heavily on their mind. They had to banish their demons and play their hearts out on their home soil.

Paul Gascoigne, at Rangers that time, was already regarded as the most talented player of their generation. Fondly called Gazza he was also known as a party animal apart outside the football field. Gascoigne scored a fantastic goal against eternal rivals Scotland and went onto celebrate with his teammates. The celebration from Gascoigne and his celebration at the Euro went viral and was coined “The Dentist’s Chair”.

England were paired with old foes Scotland in Group-A that also had Netherlands and Switzerland. The Three Lions drew the first game with underdogs Switzerland 1-1. They had to win in their second game to have any chances of progression.

Wembley was the venue as another chapter in the England-Scotland rivalry unfolded. England took charge early on in the game but were unable to take the lead as the half ended 0-0. Alan Shearer scored early in the second half to show something for their dominance. Scotland had a golden chance to equalize as they won a penalty. Gary McAllister squandered the chance as Davis Seamen kept it out. Then came the moment of brilliance from Gazza that relieved the hosts of pressure.

Paul Gascoigne latched onto a hopeful ball from Darren Anderton and showed a piece of world-class skill. He flicked the ball over a shocked Colin Hendry with his left foot before setting up for a right-footed volley past the helpless Andy Goram. The goal showcased the midfielder’s genuine skill and talent.

As the ball hit the back of the net Gazza wheeled away in jubilation. What followed later was a very rare pre-planned celebration in those days. Gascoigne went to the water bottle as planned earlier and lied down with his arms wide out and mouth open. Shearer, McManaman and Jamie Redknapp followed him with their own bottles and started showering him with water. They emptied the entire bottle onto Gazza who was enjoying the moment. The entire celebration was later dubbed The Dentist’s Chair.

England qualified to the Euros as hosts without needing to play it out in the qualifiers. They instead prepared for the tournament with a series of friendlies. The Three Lions visited Asia as a part of these friendlies where the infamous incident occurred.

England played their final few games in Hong Kong. The squad was given a well-deserved off after the final games. What was supposed to be a normal party ended as a disgrace to the football team. Many players were pictured soaked in alcohol and half-naked in a dentist chair in a nightclub in Hong Kong suburbs. Gascoigne, Sheringham and McManaman were vilified by the media.

“Disgracefool” read the headlines from The Sun who were absolutely critical of the players. Many leading media outlets across the country bashed the players and felt the players were giving the wrong kind of message to the people.

The backlash put massive pressure on the English side to perform. Gascoigne’s celebration was a gesture of breaking away from the criticism. Once he scored the goal, he was forgiven very quickly by the media. Daily Mirror published ‘’An apology to Mr.Gascoigne’’. The demons of Hong Kong have been banished.

England emerged as the group winners with 7 points making it to the knockouts. They booked a quarterfinal date with Spain. The game ended goalless and penalties were needed to separate them. The hosts held their nerve and won 4-2 on pens with Gascoigne converting the final spot-kick.

A ruthless German side awaited them in the semis. Alan Shearer opened the scoring early in the 3rd minute giving England a dream start. However, Stephan Kuntz equalized in the 16th minute to peg them back. The game went into extra time as it finished 1-1 after 90 minutes of entertaining football. Gascoigne had a golden chance to win the game as he was inches away from a Shearer’s cross. England ultimately lost in penalties on sudden death 6-5 as the current England manager Gareth Southgate missed his spot-kick.

The tournament that had so much drama ended in a heart-breaking manner for the English side. Football was as close as Gascoigne’s boot was to Shearer’s cross from coming home. No matter what happened afterward Gascoigne and his Euro celebration became historic.