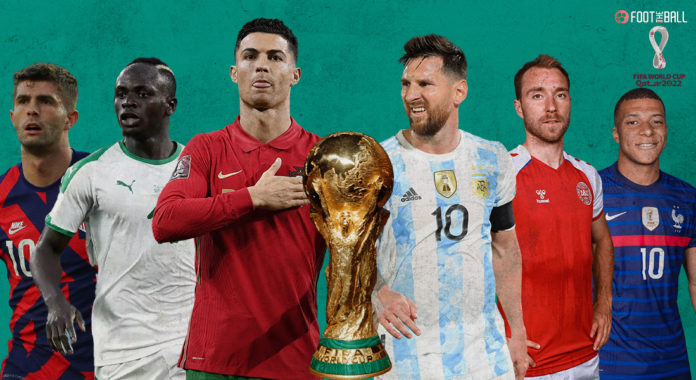 When the 2022 FIFA World Cup draw took place on April 1, only 29 teams had qualified. The qualified teams had already found out about their fate as they were split into eight groups. Now Wales, Australia, and Costa Rica won their respective playoff matches to book their ticket to Qatar and complete the list of qualified teams.

The draw has thrown out some mouth-watering ties such as Germany vs Spain, Croatia vs Belgium, and Portugal vs Uruguay.

Held for the first time in winter, the World Cup will offer a new set of challenges for teams, players, fans, and organisers. The players and their respective clubs will be concerned on how to manage their workload between playing in the respective leagues and the World Cup.

The first group includes hosts Qatar, Netherlands, African champions Senegal, and Ecuador. On paper, the dutch have the strongest team and will be expected to top the group.

The second Asian country to host the World Cup, Qatar were also drawn into Group A. Despite never qualifying for the World Cup, the host nation’s performances have improved in the last decade. The team has won the 2014 Gold Cup, and the 2019 Asia Cup is more than a match for any team.

After missing out on the previous World Cup in 2018, the Netherlands will also be looking to make a mark with African champions Senegal who have been in top form in the recent times.

Qatar have been brilliant, but Netherlands and Senegal have enough talent to take the top two spots.

1966 world champions England are joined by the USA, Iran and Wales who qualified after the draw had taken place. This is a group that could throw some surprises. England will likely take the top spot, but it is the second place where things will get heated up. The USA might look like the favourites but will get a tough challenge from Iran and Wales

The Gareth Bale led side finished behind Belgium but qualified after defeating Austria and Ukraine. While the now MLS player can conjure up moments of magic, but the collective talent of the USA will get them the second spot.

Two-time winners Argentina and Uruguay are joined by Robert Lewandowski’s Poland and Saudi Arabia in Group C. Argentina will be looking to improve upon their Round of 16 exit from the last World Cup. Meanwhile, Mexico have shown that they have the talent to knock out big teams (Germany in 2018, for example).

Poland may have Lewandowski, but the inability of the other players to step up will cost them a place in the next round. Saudi Arabia have topped their group while conceding only four goals, but against better quality teams, they will be found out.

Defending champions France find themselves in Group D. The Blues will face Denmark, who will have Christian Eriksen in their squad, a year after he suffered cardiac arrest at the Euros, Tunisia and Australia who qualified for the tournament after the draw was held.

France have a plethora of talent and will easily top the group, but Tunisia and Denmark can both have a claim for the second spot. Tunisia had one of the meanest defence in the African qualifiers. However, Denmark have quality players such as Eriksen, Pierre-Emile Højbjerg, and Kasper Schmeichel, which will ultimately help them secure the second spot. The Australians will be exposed due to lack of top-class talent at the biggest stage.

The Group of Death. The 2010 and 2014 World Cup champions are in the same group and is perhaps the most significant group stage tie. They will be joined by Asian powerhouses Japan, and 2014 World Cup dark horses Costa Rica who qualified after the draw was held.

The four-time world champions finally ended their 15-year relationship with manager Joachim Loew who was replaced by ex-Bayern Munich’s treble winning manager, Hansi Flick. Die Mannschaft have always been a team to watch out for and will be looking to forget the past world cup’s demons. Meanwhile, The 2008 World champions are among the strongest teams in the World Cup. ‘La Roja’ topped their group after winning six, drawing one and losing one.

However, they were unlucky to bow out in the semi-final to Italy on penalties despite dominating them for 120 minutes, and thus will be looking to go all the way in Qatar.

While Germany and Spain will likely take the two spots but will receive a tough challenge from Japan, and Costa Rica who can spring up surprises which in the case for the North Amercans has already happened eight years back.

This is perhaps the last chance for Belgium’s golden generation to etch their name in history by winning an international trophy. They are joined in Group F by 2018 finalists Croatia, Morocco, and Canada (first qualification since 1986). Currently ranked number one, Belgium will top the group.

Morocco conceded just once and scored 20 goals while topping their group, but they and Canada will ultimately fall short of Croatia’s talent who will follow Belgium into the Round of 16.

Five-time world champions Brazil are in Group G and are joined by Serbia, Switzerland, and Cameroon. The Selecao dominated the CONMEBOL qualification group as they won 14 and drew three games to qualify as the group topper from South America. With a potent mix of talent across the board, they have become the bookie’s favourite to win their sixth World Cup and qualify as group toppers.

Switzerland have shown by knocking France out in the Euros that they can rise to the occasion, but Serbia finished as group toppers ahead of Pot 1 seeded Portugal and thus will likely join Brail for the next Round.

Cristiano Ronaldo’s Portugal are in Group H and are joined by Uruguay, Ghana, and South Korea. In recent years, Portugal has been dubbed as the team that has ‘Cristiano Ronaldo’. However, this time Selecao das Quinas can now call upon the services of Diogo Jota, Ruben Neves, Joao Felix, Bruno Fernandes, and Bernardo Silva.

Meanwhile, Uruguay have also a mix of experience in Luis Suarez, Edinson Cavani, and Diego Godin, along with the youthfulness of Darwin Nunez, Rodrigo Bentancur, and Facundo Torres.

Ghana and South Korea have performed brilliantly but will likely fall short against the talent of Portugal and Uruguay.