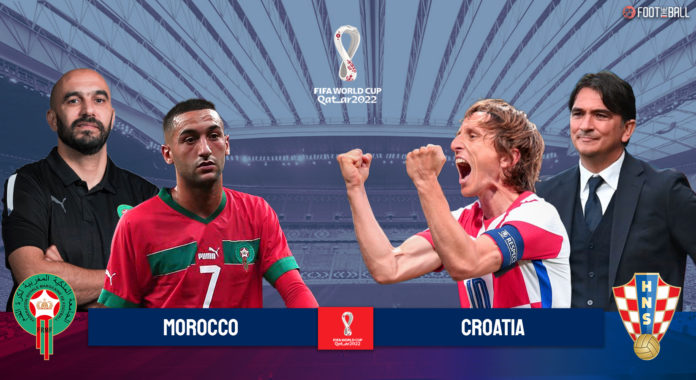 The end result of every FIFA World Cup is the same; one winner and 31 losers. However, among the 31, the team who regrets the most is the one that loses the final. Knowing that you were just one step away from being a part of football folklore is a bitter pill to swallow. After losing the FIFA World Cup final in 2018 to France, Croatia return to the tournament starting their campaign against African giants Morocco.

The Vatreni were just a whisker away from a World Cup title and now return to make that final step. Manager Zlatko Dalic has selected a formidable squad with enough talent to replicate the last World Cup heroics or even go beyond that. Like the previous World Cup, the team is being captained by the impressive Luka Modric, who is ageing like fine wine helping Real Madrid to a double just last season.

The team also has an array of talented youngsters, such as Lovro Majer, who is considered Modric’s heir. In addition, the team has Red Bull Salzburg’s young forward, Luka Sucic, and one of the best young defenders, Josko Gvardiol.

Standing in their way will be Morocco, a team built on defensive stability. The Moroccan football federation had caused a stir by sacking manager Vahid Halilhodzic who had multiple conflicts with players, especially Hakim Ziyech and Noussair Mazraoui. Now the team’s fate is in the hands of former national team player Walid Regragui. The 45-year-old has experience winning silverware as he guided Moroccan club Wydad AC to the 2021–22 CAF Champions League.

The team is stacked with stars such as Besiktas’ Romain Saiss, PSG’s Achraf Hakimi, and Sevilla’s Youssef En-Nesyri. However, despite having such a brilliant team, they have massively underperformed, losing the last African Cup of Champions (AFCON) losing to Egypt in the quarter-finals.

According to Opta and other sports sources. Here are African Countries and their chances of winning a match in the World Cup

Regragui has selected a 26-men team for the FIFA World Cup, including some brilliant players. The only notable player that has missed the flight to Qatar is Amine Harit. The midfielder was injured in Marseille’s last match before the World Cup against AS Monaco. This means that Morocco have a gaping hole in the middle of the park. He has been replaced in the squad by Anass Zaroury, who plays for Burnley in the EFL Championship.

Dalic hinted strongly that Kramaric will start vs Morocco and that the only selection dilemma is who will play RW being based around who will link up best with him. Sigh.

Croatia, meanwhile, come into the FIFA World Cup with a squad that has a perfect balance of experience and talented youth. One significant relief for the team is that they don’t have injury concerns. In defence, the team will heavily rely on Gvardiol and VFB Stuttgart’s new left-back sensation Borna Sosa. However, there are two areas that the Croatians look weak, a lack of a reliable goalkeeper and a consistent striker. Based on form, Dinamo Zagreb’s Dominik Livakovic will start in goal, while Hoffenheim’s Andrej Kramaric will be the number nine.

Morocco come into the World Cup to diminish the pain of the last tournament. The Atlas Lions took only one point, which included a loss to Iran. However, the team is one of the dark horses at the tournament and have the personnel that can hurt any team on their day. One of these players is Chelsea’s Hakim Ziyech, who will be the national team’s star attacker and source of goals.

When Croatia reached the World Cup’s final, Luka Modric was 33 years old, and the midfielder won the Ballon d’Or. Four years later, Modric seems to have gotten even better. While he may not be as mobile, his positional awareness has only improved, helping him control any game’s flow as a Regista. The Croatian needs ample defensive support, which he will get from his partners Matteo Kovacic, and Marcelo Brozovic. Croatia also have Lovro Majer, who can act as an impact substitute in any match.

It is an important match for both teams, as the other two in the group are Belgium and Canada, who are no pushovers. And thus, Morocco and Croatia will both be looking for a brilliant start and a win to make their path to qualification to the next round much easier.

However, the Croatians are better equipped with talent across the pitch, which will make a huge difference. FootTheBall predicts a 2-1 win for Croatia.