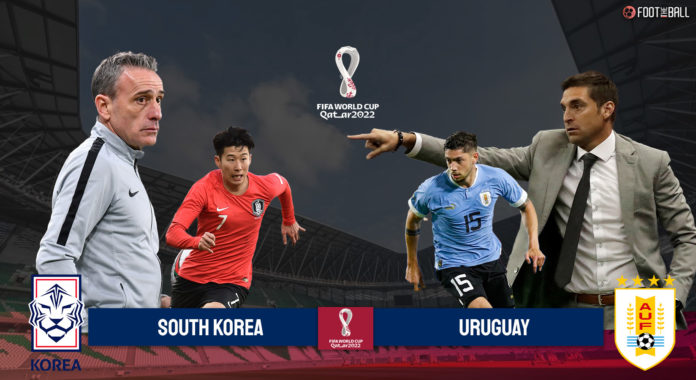 Uruguay face off South Korea in the Group H opener in the Education City Stadium this Thursday. Keeping in mind the difficult nature their group, both the nations would wish to hit the ground running.

In December 2021, when La Celeste were sitting seventh in the World Cup qualifications table, Diego Alonso was entrusted with the herculean task of filling the boots of Óscar Tabárez, colloquially known as El Maestro in the football world. Tabárez had chaperoned Uruguay for over 15 years and led them into three World Cup finals.

Since then, Alonso has steadied the ship, and with seven wins from the last nine fixtures, his team arrive in Qatar bearing bundles of talent and bright hopes.

Alonso must be credited with shaping a new-ish identity of this La Celeste side that has a wonderful balance of youth and experience, and attempts to play an authoritative and fast style of football.

There are four players from the class of 2010 who, with all their wisdom, will be entering their fourth World Cup, while there’s a maturing nucleus of youth players, led by the likes of Federico Valverde, Darwin Núñez, and the currently-injured Ronald Araújo, that create the crux of the starting XI.

The manager and the country’s leading goal-getter, Luis Suárez, have not shied away from voicing lofty claims of lifting the golden cup. To do so, their first mission will be to start and stay on their toes against South Korea, who as the Germans can tell you, are no pushovers.

On the other hand, Paulo Bento’s South Korea are the fifth team to qualify for a 10th consecutive World Cup but their build up to the tournament has been far from flawless. Although the Taeguk Warriors are undefeated in their last five games, the trouncing losses to Brazil (5-1) and Japan (3-0) dampen one’s faith in the 28th-ranked side, especially against top-quality opposition.

However, the biggest anxiety for Bento and his team has been Son Heung-min’s injury in Tottenham Hotspur’s last Champions League fixture against Marseille, just before the start of the great gala in Qatar. The talismanic forward fractured his eye socket, and, for long, it was unclear what implications that might have on the playing XI.

Bento is a stubborn man when it comes to his system, and outrightly demands his players to hold a lion’s share of possession. However, the Portugese would definitely wish that his side could be more clinical with the chances they create after harbouring a large claim on the possession.

There’s only so much that one can read into by scrutinising the pre-tournament form and trends (case study: Argentina). The energy, or conversely the apprehension, caused by the sheer enormity of the occasion also plays a huge part. The Taeguk Warriors would be hoping to go into the fixture with a positive approach as they seek their second-ever victory against La Celeste.

Barring the injury to central defender Araújo, who is out of action since September, Uruguay do not have other concerns. There were reports that Núñez temporarily left a training session with an ankle problem but he is not in danger of missing this fixture.

Despite the facial fracture, it is being reported that Son Heung-min, the South Korea captain, will feature in the opener, sporting a facial mask.

There are also concerns over the left-back Kim Jin-su, who has been sidelined with a hamstring injury since early November.

When it comes to genuine match-winners and generational talents, Uruguay is richly privileged. They still have the former FC Barcelona dynamite Suarez and his understudy, Liverpool FC’s rising fireball, Núñez. Araújo and Rodrigo Bentancur are also forces to be reckoned with.

But in the current context, there’s arguably a bigger star in the team than Real Madrid’s Federico Valverde. With eight crucial goals – most of them being thunderstrikes – and four assists for his club, the 24-year-old has built on his previous season’s good work and unlocked a new dimension under Carlo Ancelotti.

The perennially-running Valverde has now morphed into a versatile right-sided midfielder and winger who enjoys controlling from the centre as well as taking on the full-backs. La Celeste would be beseeching that he can produce more of the same in the Sky Blue jersey.

Although Napoli’s Kim Min-jae has been a towering defensive figure for club and country, it would be hard to deny that South Korea depend the most on their national hero, Son Heung-min. And rightfully so.

He’s one of the greatest Asian footballers, who finished as the 11th-best player in this year’s Ballor D’or – the highest for an Asian. To reach these heights, he’s been a record-breaking finisher and creator for Spurs, alongside his chief-in-mischief, Harry Kane.

As per The Athletic, the 30-year-old, goal-contribution wise, has been the most productive forward for the Taeguk Warriors under Bento.

50-million-or-so strong South Korea would be praying that their Son can manage his injury and overcome his sticky form at club level to once again emerge as the nation’s ascending sun at Qatar.

A lack of speed at the back for Uruguay and South Korea’s impressive ball possession abilities can mean that this game turns out to be a close tie, but the individual brilliance of certain Uruguayan players should ideally see them through. FootTheBall predicts a 2-1 victory for Alonso’s Uruguay.