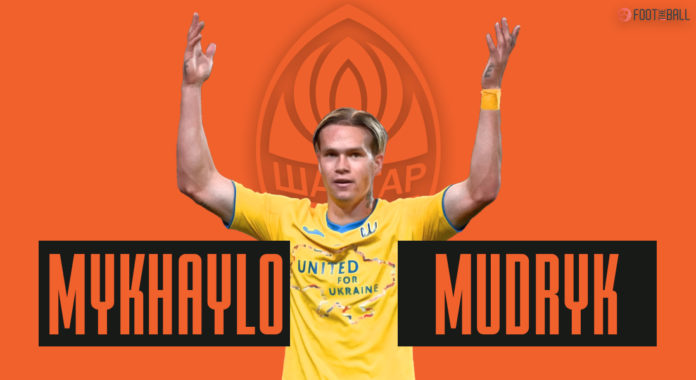 For years, Shakhtar Donetsk have been one of the most successful football talent factories in Europe. Fernandinho, Willian, Henrikh Mkhitaryan, and Oleksander Zinchenko are some players who came out of the system.

The club has been known for having an excellent scouting network and youth teams that have enabled them to churn out talent regularly. The peak of their youth academy was the 2014-15 season when they reached the final of the UEFA Youth League.

While the situation in Ukraine has forced Shakhtar to play away from home, they have witnessed no dip in the form, whether it’s in the league or the youth system.

And the latest talent to come out is Mykhaylo Mudryk. Before joining Shakhtar Donetsk, the 21-year-old has been part of the Metalist Kharkiv and the Dnipro Dnipropetrovsk youth academy.

Shakhtar had known early in his development that Mudryk was filled with potential. And as he swiftly rose through the youth system he was promoted to the senior team in 2018. And then, he was immediately sent on loan to other clubs to ensure that his development did not stall due to limited minutes at Shakhtar.

In case you missed it: Football is beautiful?

The 2021–22 season has been his best in his senior career so far, where he has scored two goals and provided nine assists in 19 matches. His brilliant performances are the reason that the club are currently top of the table.

Though he is still far from a finished product, Mykhaylo Mudryk’s style is similar to Neymar’s at PSG. Like Neymar, he loves to dribble and use his pace and skill to get past defenders. In addition, he also likes to exploit the width of the pitch.

MYKHAYLO MUDRYK HAS ANNOUNCED HIMSELF FOR 🇺🇦⚡️

What a performance from the Shakhtar LW!

He scored with a fantastic finish (unofficial in the record books sadly 😢) pic.twitter.com/F1QPhtI6Jq

One of his major weaknesses is shooting. And though most of his shots are from positions with low xG, he is also not a great player in the box.

However, if he keeps improving his creative output, even a marginal improvement in his shooting will make him a lethal attacker.

Mykhaylo Mudryk will leave the club this season with a move to Bayer Leverkusen, all but confirmed. The Ukrainian, in an interview, had confirmed that he would like to join the German club. Brentford also wanted the player, but Mudryk has made his intentions clear that he wants to play in the Champions League football, which he would get at Leverkusen.

He would also be quite handy for Leverkusen, who doesn’t have a player that is an outright starter on the left-wing.

Mykhaylo Mudryk is optimistic that a transfer from Shakhta Donetsk to Bundesliga club Bayer Leverkusen can be completed.

“Mudryk said. I have decided for myself that it,s is the only club I want to join."A transfer to Premier League club Brentford is not an option. #Mudryk #Bees pic.twitter.com/7XJ58PCFar

And Leverkusen have a brilliant track record for developing young players, especially attackers.

While Mudryk might still be a player with huge potential, he has all the tools to elevate him to the top level of football.