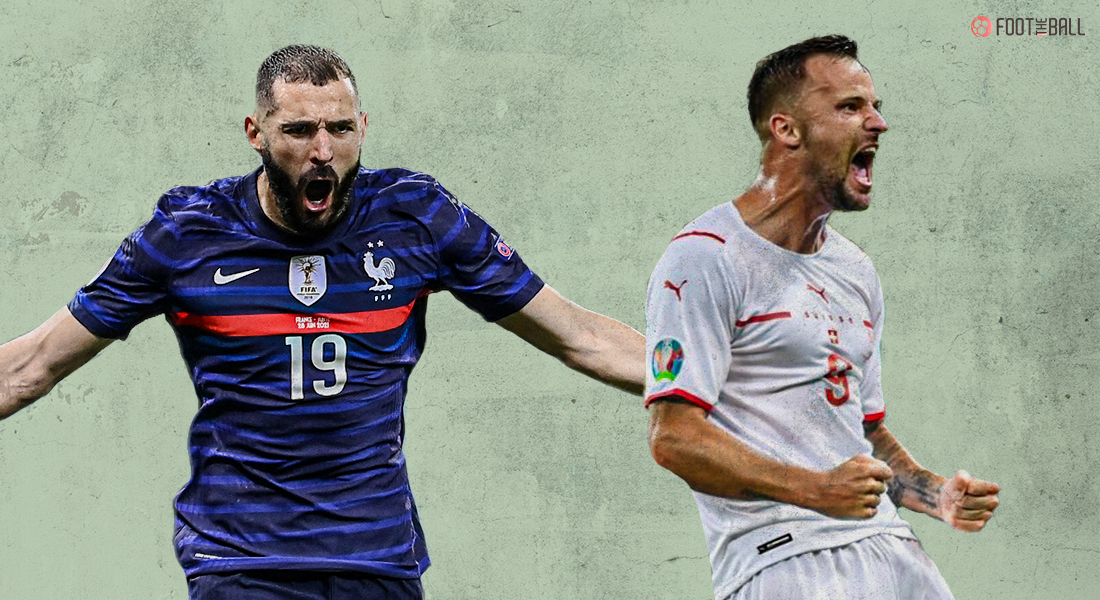 After the madness in Denmark with Spain’s extra-time victory over World Cup silver medalists Croatia, the Euro carnival turned to Romania where a glittering, mouth-watering, and sparkling fixture ended with Switzerland conquering France on penalties 5-4 after the extra-time whistle with the two teams locked at 3-3.

Swiss’ disciplined first-half display was matched by France’s reconstruction in the second half as they led 3-1 with just a handful of minutes left. But with boldness and fearlessness injected in Switzerland’s blood, the underdogs were loudly screaming against a dominant French squad.

Maybe the Swiss players understood the real importance of surprises as they gave Tottenham Hotspurs’ show-stopper and the French leader Hugo Lloris’ an early and salty Christmas present.

Granit Xhaxa’s marching troops decreased the French advantage with 10 minutes left on the clock and then shockingly equalised the scoreline in the dying minutes.

The unbelievable had happened as the World Champions were shell-shocked as the Swiss had murdered all of Deschamps’ staggering managerial tactics.

The last ingredient, Extra-time topped off a perfect round-of-16 delicacy for the world to feast on with penalties being served as a plate of desserts. With 30 minutes of additional football being played, a spot-kick battle gave Switzerland a quarter-final berth sending France home.

After an incredible fixture at the footballing fiesta, we at FootTheBall look at who were the actual diamonds in the high heated fixture and who faltered at the momentous setting.

A shocking first-half for the footballing fans, the Swiss were dominating the World Champions. Belgium conquering the Euro reigning champions, the Czech Republic knocking out ‘Tournament Favorites’ Netherlands, the knockouts have been a fairytale story for pundits. Haris Seferovic’s thundering header into Hugo Lloris’ net magnificently stunned the commentators. He has a really good all-around ability. He has a strong and dominating presence on the pitch that lead to Lenglet and Kimpembe barely surviving the first 45 minutes.

A constant difficulty for opponents, the Benfica and Switzerland striker complements it with solid ball-handling skills. He can easily sniff a sneaky ball through the middle and connect up with fellow individuals because of his keen awareness. However, he isn’t the fastest but a tremendous header sealed the deal for Switzerland for most parts. Seferovic’s combination with Embolo was a headline linkup. Didier Deschamps adopted a three-at-the-back system looking to smash some goals against underdogs Switzerland but Seferovic’s heroics dazed the French world cup winning leader.

With France running with a quarter-final ticket Switzerland looked to recover from the ashes. And Seferovic, the Swiss gladiator notched up his performance at the dying minutes of the game. Paul Pogba dumped possession as Seferovic and Switzerland caught the French defence napping. And Lloris’ netted fortress was bundled over by Seferovic’s second-header of the match as Mbapu delivered the perfect delivery. Leading Switzerland’s re-establishment in the game, Gavranovic’s thumping strike in the dying seconds rejuvenated the Swiss devotees in Romania. As the game went on to extra-time from an impossible position for Switzerland.

HONOURABLE MENTIONS: Switzerland’s twinkling outing against the world champions almost ignited another underdogs story. The Danes’ fairytale of 1992, Greece’s 2004 conquest against the muscular and five-star France squad, helped Switzerland write a memorable and golden chapter in the club’s prominent history. Switzerland’s magnificent comeback against Didier Deschamps’ soldiers produced a stunning chronicle and as the player stocks of each Swiss fighter rocketed sky-high.

Terming himself as the Formula-1 machine, Karim Benzema marched his way into the French squad after a beautiful season with Los Blancos. Performing superbly in La Liga, Benzema was elected into France’s charismatic squad over Ousmane Dembele and ‘Go-Kart’ Olivier Giroud. But except for a jaw-dropping finish against Portugal and a penalty against Rui Patricio, the Real Madrid striker has had a disappointing outing this summer. Charismatic youngster, Kylian Mbappe was carrying the dreams of a nation on his inexperienced shoulders.

But he hasn’t been supported by the old campaigner’s finishing ability. But after a shambolic first half, Zinedine Zidane’s striking bank Karim Benzema transformed the French fortunes. After France’s meeting with Hungry, questions were raised on Benzema’s poaching abilities. But like his ex-Madrid colleague Alvaro Morata, the 33-year-old silenced his haters with a perfect brace against Switzerland. After the Swiss forwards weaved magic before the break, a player of Benzema’s quality was destined for an outstanding display.

Later on, in the second half, Benzema had to drop back to the centre-circle to recover the ball which he comfortably did. Continuing recycling possession Benzema popped in with two stunning goals in a whisker. First, an assist by PSG’s million-dollar baby Kylian Mbappe in the 57th minute and then pouncing onto a deflected header in the 59th minute Karim Benzema gave France an unimaginable advantage against a depleted Switzerland outfit.

Except him Pogba and Kante were sublime in midfield. Pogba’s strike capped off a wonderful performance by the trend setting star.

The rock of the French defence, Kimpembe has been France’s silent protagonist since the start of the 2018 World Cup. But unfortunately a muddled performance against the Red Crosses’ put Deschamps’ army under tremendous pressure at the break. Completely switching the manager’s half-time talks, Kimpembe and Lenglet were at sixes and sevens. Swiss striker Breel Embolo bullied the two indestructible defenders.

Till the first-fifteen minutes of the second-half also Embolo and goalscorer Seferovic caused a million problems for Hugo Lloris. Kimpembe went flying into the tackles but his bravery turned out to be completely useless. The flamboyance of Shaqiri and the muscularity of Embolo fooled the PSG centre-back on different occasions. Deschamps had trusted Lenglet and Kimpembe going with an astounding formation at the back. With Rabiot and Pavard darting forward to support the lonely strikers, Kimpembe had to cover the spaces.

But before Lloris’s heroic penalty-save to obstruct Ricardo Rodriguez, revamped the French aspiration as Les Bleus hunted for goals Kimpembe was being caught by the galloping striking duo of Switzerland. 2 goals in a matter of seconds meant the world champions breathed a sigh of relief. Kimpembe once again looked vulnerable when France’s robust defensive strength failed to defeat Seferovic in an aerial battle to dent France’s hopes for a few nervy minutes. And finally, a golden goal by Gavranovic tore apart France’s dreams to conquer the Euros after lifting the World Cup.  Kimpembe was floored by Gavranovic’s vivacious trickery leading to the equalising goal. The backbenchers startled the toppers of the batch as France’s defensive misery sent the 2018 kings back to their castle.

ANOTHER PSG STAR WHO FAILED AT THE BIG STAGE – KYLIAN MBAPPE

A world cup hero at 18, Kylian Mbappe’s rise as the Golden Boy of modern football was scintillating displays that earned him whopping bucks of money through Europe. 0 goal in the Group-of-Death, the brawl against presented the perfect opportunity for the swashbuckling striker. Mbappe’s knack of scoring pivotal goals for Les Bleus has been Deschamps’ trump card over the years. Kylian Mbappe failed to weave his magic against the Swiss backline.

Snatching his shots, failing to allocate spaces, and rattling the fans’ and advertisements’ boards rather than the frame of the goal highlighted Mbappe’s performance. The last nail in the coffin was Mbappe’s penalty attempt was blocked by Switzerland goalkeeper Yann Sommer. A man of his calibre should have at least bothered the wall between the posts. But to Kylian Mbappe’s dejection and sorrow, the PSG veteran failed to stamp his authority in Romania.

He was indeed lucky with his assist to Benzema as the youngsters pass tangled the Los Blanco’s striker who somehow converted the ball into the goal. A monumental stage for a player like Mbappe to replicate his 2018 World Cup but instead of setting fire in Romania, he burnt the French bunker. The French team received an invitation to the quarter-finals but they were too busy to open the door.