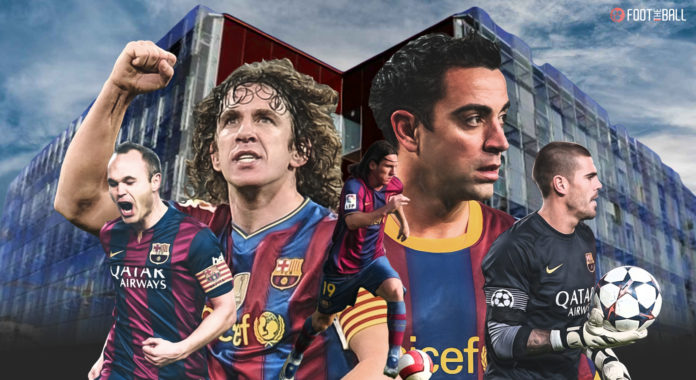 FC Barcelona was once the ideal club, successful both on the pitch and off it. In many ways, it wasn’t just a mere club, but more than that. Yet after years of mismanagement, the ostensibly epicurean squandering of money, and the allowance of the famed La Masia academy to fall into dilapidation, the mighty FC Barcelona has lost its way.

FC Barcelona has enjoyed more success than any club side in history, with an attacking philosophy rooted in hard work. Barça’s football academy La Masia is where that work begins. There were times when football was all about kick and rush, when bulldog qualities – strength and bite – were in demand.

All you need to know about Barcelona’s ‘Economic Levers’

If you weren’t blessed with dazzling skills, you at least had a fighter’s spirit, so that even after a poor performance you walked away with the points. Over recent years, however, the battling bulldog has given way to a new model of football, in fact, built around a firmly integrated team that not only unites the widest variety of types of players but in which diversity and exceptional creativity are the sine qua non of success.

There was something special about Barcelona. Players followed a philosophy which was unique to its exemplary academy La Masia. La Masia is always talked about when the greats of Football are discussed. Be it from Lionel Messi to the midfield duo of Xavi and Iniesta or Busquets or be it Puyol or Pique, La Masia is the common thing between these greats.

The greatness of the academy can be understood by the fact that Tito Vilanova on 25th November 2012 won 4-0 against Levante ending the match with every player from the 1st to the 11th from the academy. Here we talk about La Masia. Its history and explore what made La Masia the best academy in the world.

What Does La Masia Mean?

Formerly located near Camp Nou, it was one of the most prestigious youth academies in the world. In Catalan, “La Masia” refers to “the farmhouse“. The training facilities are no longer located in the city since the club relocated them to accommodate the large number of young players who lived there.

‘La Masia’ is the Catalan term for ‘The Farmhouse’. The very name of it explains why most of the players that come out of this academy are always the best. The original building was made in the year 1702 by the name ‘La Masia de Can’ and was an ancient farmstead. Barcelona’s home stadium, Camp Nou, was built in the year 1957 just next to La Masia. It initially served as the club’s headquarters, and all the club activities were run from there. In 1979, La Masia was first time used as a dormitory for housing players from outside the central city of Barcelona.

Barcelona love buying Spanish prodigies and Pablo Torre is one of them!

As the club activities were growing at a swift pace, a new building was needed to run the club and the academy. In 2011, Barcelona ceased the original building. Barca moved their activities to ‘Ciutat Esportiva Joan Gamper’ which became the new centre of the club to run the academy where the first team used to train since 2009.

Taking its name from a type of traditional Catalan farmhouse, until June 2011 La Masia housed the world’s most famous talent factory within its three-hundred-year-old walls. The facility was spread over 600 square meters close to the club’s legendary stadium, the Camp Nou, and offered places for 45 protégés. There was a kitchen, a dining room, a recreation room and a library, as well as dressing rooms, bathrooms and bedrooms, but little in the way of grandeur.

This was also where a 13-year-old Guardiola came to learn about football, moving up through the various youth sections until he was eventually handed the armband as captain of the Barcelona first team. This was also where Lionel Messi developed from a street player into the best dribbler ever witnessed, and the club even paid for the expensive hormone treatment that the young Argentine needed to grow those extra few centimetres. Xavi, Iniesta, Busquets, Pique, Pedro and the goalkeeper Valdés – all part of Spain’s European Championship-winning squad were schooled at La Masia.

Why Is La Masia Special?

The philosophy at the youth academy is simple and clear from the lowest-aged team up to the first team. It is the combination of Johan Cruyff’s total football framework and one-touch play known as Tiki-Taka that has led the academy graduates to such great success.

La Masia was established in 1979. The idea for the youth academy came from the ex-Barca star, Johan Cruyff, who attended a similar program at his native club Ajax in Amsterdam. The brightest day for La Masia came in 2010, when all three finalists for the Ballon d’Or were academy graduates: Andres Iniesta, Lionel Messi and Xavi Hernandez.

There was a charm in the slightly improvised nature of La Masia that has been lost with the relocation of the facility to San Joan Despi on the northern edge of Barcelona. The elite training centre is now called La Masia-Centre de Formació Oriol Tort, in honour of the man who set the wheels of this systematic youth development program in motion back in 1979.

Oriol Tort brought many young players through to the first team, including Guardiola and Xavi. He had passed away by the time the team embarked on its run of global success, but he knew things were heading in the right direction.

One of the reasons why La Masia was so successful is the principles it was built on. From the lowest-aged team to the first team, the philosophy is simple and clear. From Mes Que Un Club, another important reason for the success Barca enjoyed was never to let this philosophy die. The technique of dominance on the ball and moving it as if it is gliding over a wet surface was the reason FC Barcelona were able to tear apart their opposition.

This philosophy was used to its maximum potential under Pep Guardiola. With a team of players honed by La Masia, a manager who was a student of Cruyff, Barcelona changed how people used to watch football. Fans were excited not by the result, but how Barcelona played. Defeats and draws were never a disappointment as fans were always satisfied by the style of play.

The fall of La Masia

FC Barcelona’s connection to its Catalan roots was nowhere more apparent than through its work with La Masia, Barcelona’s youth system. As a result, Xavi, Andrés Iniesta, Carles Puyol, Jordi Alba, and even Leo Messi came through La Masia academy and slotted straight into the FC Barcelona senior side.

The current outcome from the academy has decreased drastically, and the blame is on the bad planning by the FC Barcelona board. The success that FC Barcelona enjoyed was due to a unique formula. The style of play and players who were honed by the prestigious academy were the formula of success. But that has changed in the past few years. It is evident from the fact that Barca’s success has dried up.

Throughout Guardiola’s time in charge, the core of his legendary team was made up of Barcelona youth academy graduates, and even after he left, that trend persisted, at least for a while. In 2012, Barça, with Tito Vilanova now at the helm, fielded a Barcelona first team of eleven La Masia players in a convincing win over Levante.

But as the years went on and president Josep Maria Bartomeu took charge, FC Barcelona developed an affinity for splashing the cash on foreign superstars, obscuring the route to the first team for its youngsters. Unfortunately, that shift in philosophy also entailed a reluctance to properly remunerate local talent, leading to an exodus of La Masia players. As a result, the conveyor belt has virtually ceased production at this point.

Now under the tutelage of new President Joan Laporta and club legend Xavi returning as manager, things have started to shape up. Players like Gavi, Ronald Araujo and Ansu Fati have all come through La Masia. But only time will tell how far this new set of players from La Masia reach in terms of longevity at Barcelona and potential.