A Home By The Bohemians! 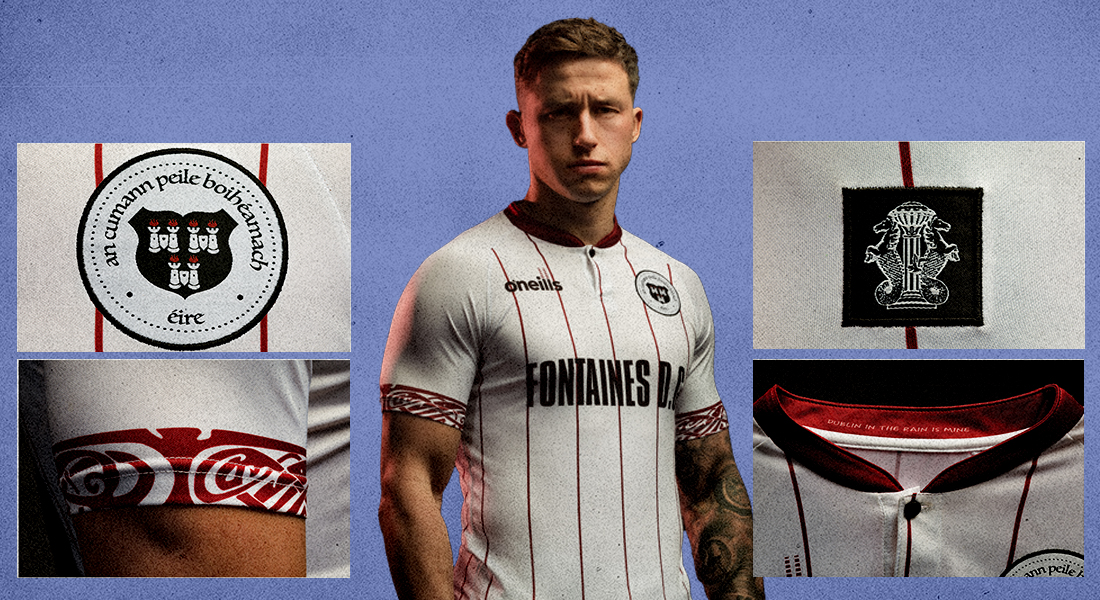 Dublin is a city of love, pints, music and of course football! And one of the city’s top football club has used this milieu to dish out a lot of love, goodness and a, AWAY jersey!
League Of Ireland’s Bohemian Football Club has unveiled their unique 2021 away jersey in partnership with Dublin’s biggest band in years, Fontaines DC,  to highlight the unacceptable level of homelessness in the country.
15% of the jersey profits will go to Focus Ireland, a nonprofit focused on homelessness.

Daniel Lambert, the Chief Operating Officer of Bohemian FC, in an interview with FootTheBall from Dublin, Ireland said: “We know that soccer and music both have enormous power to reach people and engage people. Homelessness is not something that must exist, it can, and it should be solved, and we need to ensure as a society that it is not normalized and accepted.”

Bohemians FC have partnered up for the 2021/22 season with Fontaines D.C. for a noble cause.

Sports and music can be a vehicle for social change, something Bohemian FC recognize. In the last couple of years they have made sure that they use their fanbase and reach to spread a positive message.

We're extremely proud to be a part of the new Bohs kit in conjunction with Focus Ireland as they are two organisations that we hold very close to our hearts. @bfcdublin @FocusIreland https://t.co/X8GITXdSGa pic.twitter.com/6GptJrKaTF

This has allowed certain overlooked and controversial topics to get a platform to be noticed and talked about. Bohemian FC, play in the First tier of Irish football. The club from Dublin has always possessed a keen sense of community as it is one of the few clubs in Europe that is still completely Member owned. Their conviction towards social causes which makes sure the club gives back to it’s community as much as possible. This has made the Bohs one of the most progressive clubs in Europe.

Everyone at Bohemians is extremely saddened to hear of the passing of former programme seller and supporters Mick Breslin, and extend our deepest condolences to his family and friends.

They have been working with Asylum workers since 2015. Last season they partnered up with Amnesty International. Their away kit featured an image of a family fleeing and the line under it read “Refugees Welcome”. Their initiative last season saw them raise a massive 10,000 Euros for the charity through shirt sales.

The latest initiative sees them partner with one of the biggest bands from Dublin in recent years, Fontaines D.C. , who themselves are Bohs fans and are often seen in the stands of Dalymount Park. In fact Daniel Lambert told us that : “The Band used to practice in a shed in Phibsborough which was located really close to the Stadium”.

The Dublin based duo has partnered up with Focus Ireland for this season’s initiative. Focus Ireland, which helps over 14,000 people each year who are homeless or at risk of becoming homeless. They also provide a place to call home for more than 1100 households nationwide. The charity believes that homelessness is a cause that has been overlooked for a number of years. More light should be shed on the topic, something that was echoed by Daniel Lambert in the interview.

Focus Ireland are set to receive 15% directly from all jersey sales. In the interview Lambert also highlighted that it is already bearing fruit as they have raised over 6,500 Euros already.The best part is that orders are coming from all across the globe, which makes their contribution even more significant. 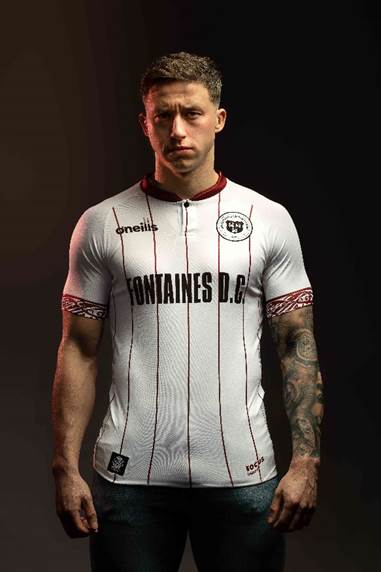 Daniel and his graphic design team are the ones that designed the away. It bears the Fontaines D.C. band name in the front. It features Celtic knot work, Dublin’s iconic Pool-beg towers, Grattan Bridge lamps, and ‘Dublin in the rain is mine’ Fontaines lyric. The sleeve is covered with a design inspired by an old Dublin coin. 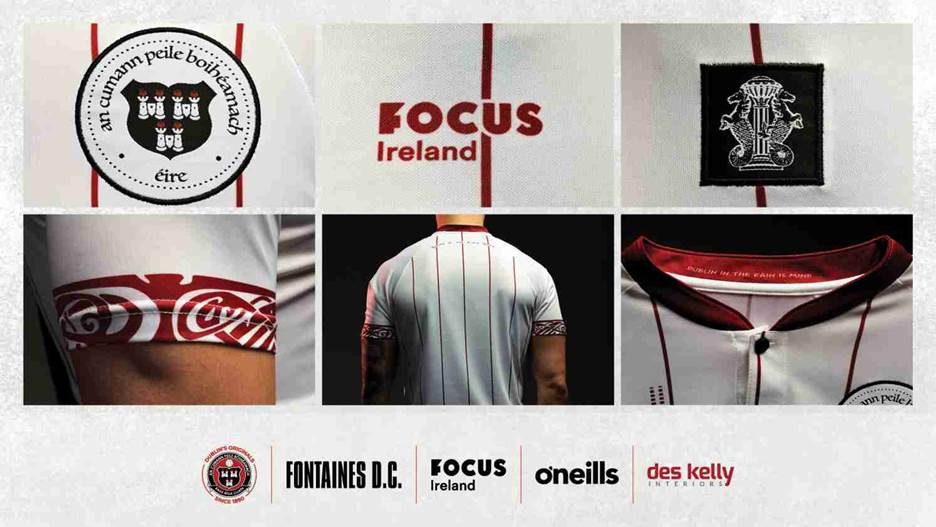 The jersey also features Irish poet Patrick Pearse’s quote ‘Beware of the Risen People’ from the wall of Kilmainham Gaol. This quote embodies the human spirit and that there is hope for everyone even when at their lowest ebb. These lines beautifully link to the struggles of the homeless  how their will to strive and survive is one of their strongest assets.

Lambert also thanked their regular Kit sponsor Des-Kelly in the interview and said: “It being a local Dublin based brand they were supportive of the partnership between the club and the band and allowed us to use the bands logo on the away kit instead of their own”. A beautiful sentiment that further highlights the connection between the community and Bohemians FC.

Homelessness is not a fact of life & cannot be normalised in Ireland!

Bohemians FC start their new season on Saturday away to Finn Harps, which means the jersey would get to be seen by many around the world on Saturday. We all at FootTheBall wish them the very best for the new season and would like to take our hats-off for such a brilliantly thought initiative that champions such a noble cause. A route similar to Marcus Rashford who made sure to use his platform to spread a positive message.