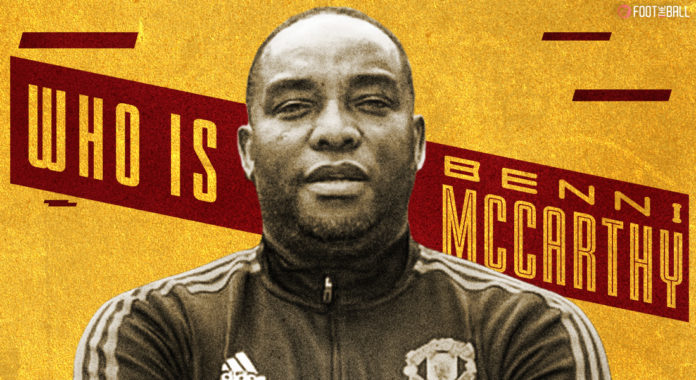 The winds of change at flowing at Old Trafford. Pre-season at Man Utd has shown Erik ten Hag’s quickly wanting to make his mark on the club. From new arrivals, like Lisandro Martinez, Tyrell Malacia and Christian Eriksen, to changing small things like where the dugout is located, ten Hag has rung the changes. Therefore, it was no surprise to see a new name arriving on the staff as well. Erik ten Hag brought Mitchell van der Gaag and Steve McClaren with him initially. Now, that staff will be supplemented by Benni McCarthy.

Official. Manchester United boss Erik ten Hag has added to his backroom team with the appointment of Benni McCarthy as a first-team coach. 🔴 #MUFC

The ex-forward will specialise in coaching attacking plays and positioning. pic.twitter.com/nhxTFe8NVt

The legend from South Africa has been appointed as a specialised Striker’s coach. He will mainly be coaching attacking plays and positioning. So, who is Benni McCarthy, and why should fans be excited about this appointment? Let’s take a look at Benni McCarthy’s new job.

Who is Benni McCarthy?

Benni McCarthy is a South African legend who was a prolific striker during his playing days. Having started his career at Seven Stars in South Africa, he had a whirlwind career that took him to four countries, multiple titles and lots of goals. He remains South Africa’s record international goalscorer to this day.

McCarthy has said that he was “heartbroken” to score twice and knock Man Utd out of the competition. Mark Hughes, Andy Cole and Ryan Giggs have been some of his inspirations as a player. Man Utd has always been a dream club for Benni McCarthy so this is undoubtedly a dream come true for the South African.

Beyond his loyalty to the Red Devils, this is an exciting appointment from a performance point of view as well. Benni McCarthy has done very well in his limited time as a coach. He holds a Pro License as a coach and has brought about the best of every team he has been at.

McCarthy is credited with leading AmaZulu to their record-high finish in South African domestic league history, finishing 2nd in 2020-21. McCarthy won South African Coach of the Year for his efforts. Moreover, he was also offered the position of the Head Coach of the international team. However, that move didn’t happen due to upheaval in South Africa’s football administration.

He created history with both AmaZulu and CTC as a coach pic.twitter.com/P6qKuBIaZt

AmaZulu played an attacking style of football that embodied Benni McCarthy’s playing style as a player. Choreographed attacking patterns could be seen in their play, a staple of the modern game. Man United will be hoping he can drill their forwards into attacking shape as a new team takes shape under Erik Ten Hag.

Benni McCarthy’s new job- What does it entail?

As per the press release, Benni McCarthy will be joining as a part of the first-team staff with immediate effect. He will be tasked with coaching attacking plays and positioning. Man United go into the season a bit light in the attacking department. Moreover, the future of Cristiano Ronaldo hangs in the balance.

Benni McCarthy’s main task will be to unlock the potential of Marcus Rashford and Anthony Martial. Both have impressed in the pre-season but lack in the one department McCarthy specialises in- Positioning.

Rashford and Martial often pick up the ball in less dangerous spaces and seek to beat multiple players off the dribble. McCarthy’s job will be to drill the concept of attacking spaces in their minds. Although both have impressed in the pre-season, much more will be expected of them as with thinning squad depth, they are arguably undisputed starters at this moment.

14 years ago, they battled it out for the EPL Golden Boot 🔥

McCarthy’s experience of playing in the Premier League will also be invaluable for youngsters like Charlie McNeil, Alejandro Garnacho and Anthony Elanga. These players are taking their first steps in senior football. Therefore, having an experienced head in McCarthy guiding them through the nitty-gritty of English football will accelerate their development.

With McCarthy’s signing, United have pretty much a completely new coaching staff, with the exception of Eric Ramsay and Darren Fletcher. New ideas are being implemented, and the results are already starting to show. Benni McCarthy’s arrival is another indicator of Erik ten Hag’s overhauling the club’s operations and bringing the club to modern times.