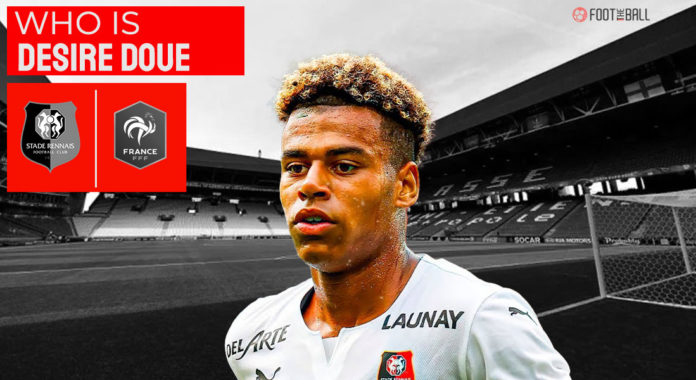 Over the years, Ligue 1 may have been tagged as a ‘farmers league’, especially after the Paris Saint Germain (PSG) rise. However, the league has made a name for developing young talents. Sael Kumbedi and Castello Lukeba of Lyon, Sepe Elye Wahi of Montpellier, and Warren Zaire-Emery of PSG are just some of the youngsters in the league. And now Rennais’ Desire Doue looks to be joining the list.

The 17-year-old central midfielder has been one of the finds of this season in Ligue 1. Ousmane Dembele, Eduardo Camavinga, Tiemoue Bakayoko, Sylvain Wiltord, and Mikael Silvestre are some of the top names to come out of Rennais’ academy, and now Desire Doue looks to follow these players to greatness.

Desire Doue’s rise is one of the chief reasons Rennais are currently fourth in the league, ahead of teams such as Marseille, AS Monaco, and Lyon.

So, who is Desire Doue, and how good is he?

How good is Desire Doue?

Desire Doue was born on June 3, 2005, and started his football journey at just five years of age. In 2011, he joined the Rennais youth academy. It was here that he would spend the next ten years. During this time, he would progress through the youth ranks, making a name for himself along the way.

His rise did not go unnoticed, as he was given a promotion to Rennais’ second team in the 2021-22 season. There he would play ten games in National 3 – Bretagne scoring one goal and providing one assist. He would also make it to Rennais’ senior team, being named on the bench in both Ligue 1 and UEFA Conference League.

He would also represent France’s under-17s in four games scoring two goals and providing one assist. And anyone who saw him playing knows Desire Doue had a great chance of making the first team next season. They were not wrong, as Bruno Genesio called the talented teenager to the senior squad.

He has been brilliant so far, scoring two goals while playing only 400 minutes. Averaging a goal every 200 minutes from a central midfielder position in the first senior season is brilliant.

While Desire Doue has only made 11 appearances, never playing the entire match, his status is among the best in central midfielders. We have already discussed his goals-per-minute contribution earlier in Ligue 1, but he also delivered eye-catching displays in the Europa League, scoring a brilliant goal against Dynamo Kyiv.

Rennes are putting together one of the strongest assortments of young talent in Europe under Florian Maurice:

Doue is also brilliant at initiating pressures and helping his team retain their possession. As a result, Rennais are currently second in Buildup Disruption Percentage (BDP) and third in Field Tilt and possession. While Doue has played only 400 minutes, he has shown these qualities, which have earned the praise of his manager.

Desire Doue is only 17 years of age but is technically and physically far above his level. He is an ace midfielder who takes little time to cover the entire field, which helps his team in attack and defence. Whenever Rennais wins the ball, Doue either takes the ball forward by himself or makes sure he gets to the opposition’s goal in time to help in the attack.

Doue is also brilliant at dribbling, which allows him to move the ball forward quickly. However, he also offers defensive stability, winning the ball, especially in the middle of the park. This allows him to constantly win the midfield battle ensuring the team has the majority of possession.

However, one area where he struggles is his decision-making. For example, he loses the ball in the attacking third or plays an under-hit or over-hit pass at a critical moment. However, as Renne’s sporting director Florian Maurice has said, he is still at an early age in his footballing development. “Everything is possible for him. It’s up to him to go and find playing time,” Maurice said.

When there is a talent like Desire Doue, the talk of transfers must be around the corner. However, so far, no credible interest from any club has been found to sign him. Doue is just 17, and while he may be a brilliant addition to any club, Rennais would not let him go without a fight. Remember, Rennais is the club that sold Eduardo Camavinga for €40 million. In addition, the club has also signed a new contract with the player that runs till 2025 with an option for a one-year extension.

So, they would only let a player of his stature leave without a substantial offer. And it will also be helpful for him if he wants to develop himself as one of the best young players in Europe.