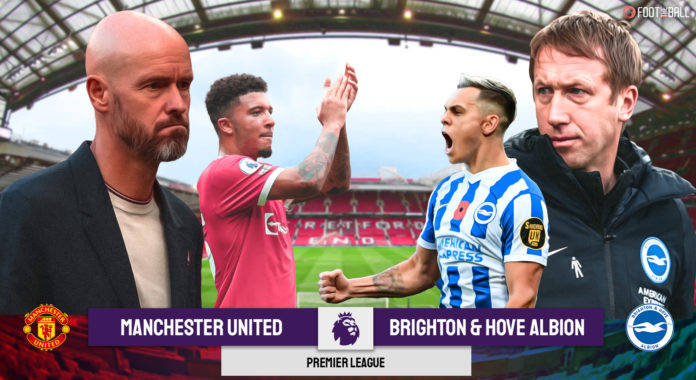 The pre-season is in the rearview mirror. The fight for points begins now as the Premier League’s first matchday edges closer. The match that will be of huge attention will be Manchester United vs Brighton on August 7, 2 PM (BST). New manager Erik ten Hag learned a lot about his side during a crucial pre-season. Now, it is time to buckle up and start his revolution when matches have actual stakes attached to them.

If history is any indication, Brighton are not going to make it easy. Under Graham Potter, Brighton have looked energised. The side had their highest-ever PL finish last season, coming 9th. Brighton famously beat United 4-0 at their home last season and lost narrowly at Old Trafford.

Brighton will dream bigger this season. They would be hoping to give a scare to teams battling for Europe. They haven’t made many signings but Julio Enciso is one to keep an eye on.

Manchester United, on the other hand, have strengthened multiple positions with hopefully more to come. The Frenkie de Jong saga is dragging but ten Hag will be fully focused on getting the most out of the team at hand. With all that said, let’s take a look at Manchester United vs Brighton preview.

Manchester United, look to have settled on a 4-2-3-1 formation during pre-season. The Red Devils have made three signings so far, with all of them expected to play a key role during the season. However, Christian Eriksen might have to wait for a first start. LB Tyrell Malacia and marquee CB signing Lisandro Martinez, however, are set to be thrown at the deep end from day one. Erik ten Hag’s ideal Man Utd team could take some time to take shape.

Tyrell Malacia and Lisandro Martinez’s playing style looks perfectly suited to an Erik ten Hag team. Martinez should start alongside captain Harry Maguire, while Diogo Dalot would round up the defence as Aaron wan-Bissaka remains in the cold. The “McFred” midfield might begin the season as first choice so as to not imbalance the team highly at once, risking lack of cohesion. Up front, Jadon Sancho has recovered from a knock he had during pre-season. He would have started in a quartet with Bruno Fernandes, Marcus Rashford and Anthony Martial as Cristiano Ronaldo’s future is unclear. However, with Martial’s sudden hamstring injury, Alejandro Garnacho could be thrown into the deep end if ten Hag decides Ronaldo is not fit.

Getting ready for the Reds. 🔴💪 pic.twitter.com/symEXSjSGk

Brighton, on the other hand, look weaker than last season, having lost talisman Yves Bissouma to Spurs this window. They are embroiled in a saga of their own as last season’s Player of the Year, Marc Cucurella is set to leave the club, thereby being unavailable for selection. Therefore, a gaping hole lies in the midfield and LB spot. However, they are secure at the GK spot, with the ever-reliable Roberto Sanchez set for another good season.

Goals change games, and for Manchester United season, they will live or die by the goals scored by Anthony Martial, especially if Ronaldo leaves. Although possible Ronaldo replacements are being looked at, Martial is the undisputed first-choice striker. However, his injury throws a wrench in ten Hag’s plans. He now either goes with a half-fit, probably non-committal Ronaldo, or puts Alejandro Garnacho in his baptism of fire. By all accounts, ten Hag has looked like the kind to stand firm. Therefore, Garnacho should have a chance to set the world alight.  He should be ably assisted by a rejuvenated trio of Rashford, Sancho and Fernandes.

Lisandro Martinez’s debut is also one to watch out for.

Brighton, meanwhile, will look towards their talisman, Belgian international, Leandro Trossard. He scored a hattrick in Brighton’s last pre-season game against Espanyol and his set-piece delivery could especially be crucial against a United defence still susceptible at defending set-pieces.

A home fixture to start off the season is ideal for the new manager. However, Brighton have traditionally proven to be a tough nut to crack for United. Still, with the euphoria of a new manager, and some promising play in pre-season, it is hard to bet against United for this game. A clean sheet will be of prime importance.