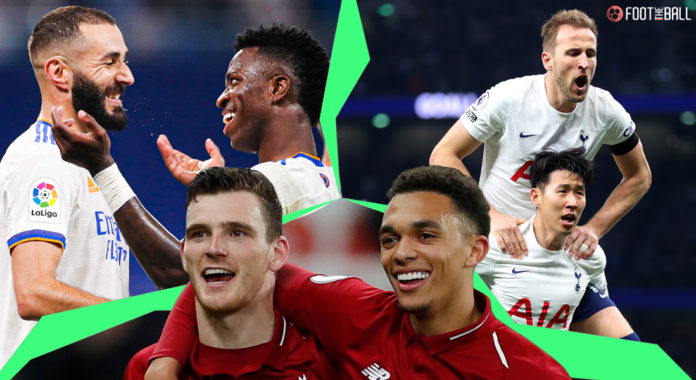 Football is a team game, that is all well and good. However, there are partnerships within a team structure that deserve a mention. These are the combinations that work extremely well whenever they are on the pitch. A special emphasis is placed on the football duos that work the best.

Who is Josh Wilson-Esbrand, the young left-back touted by Pep Guardiola as the future star?

These are the two players who go perfectly together. They understand range, form, positioning, and effectiveness.

No matter in which position, footballing duos have always been a class apart. Thierry Henry-Dennis Bergkamp, Andy Cole-Dwight Yorke, Luis Suarez-Daniel Sturridge, and many more.

Therefore, it makes sense to focus on them as the new season is well underway. In that regard, FootTheBall brings the top 10 best football duos to watch this campaign.

The pair have a combined four Golden Boots in seven years. Harry Kane has been one of the most lethal forwards in the world. Moreover, he has superbly improved his linkup play, which makes him a deadly proposition in starting attacks too.

On the other hand, Son scored 23 goals in 2021-22 to share the individual prize with Mo Salah. The South Korean is one the best at his craft, running with incredible speed before finishing masterfully.

Kane and Son were instrumental in Spurs securing UEFA Champions League football in 2021-22. Therefore, they would look to continue their marauding ways soon. Moreover, they have also added Richarlison to the mix in another step to cementing top-four.

The linkup that the whole of Premier League waited for. Haaland was in rampant form during his stay with Borussia Dortmund and that has continued at the Etihad stadium this season.

His physicality, speed, and clinical finishing made him the second best forward in Germany. On the other hand, Kevin De Bruyne is one the best in finding attackers. The Belgian has the Premier League joint record for most assists in a season with 20. The duo has already worked wonder for Pep and Manchester City after combining for multiple goals.

Therefore, this is a combination that would terrorize every team. De Bruyne can spray the ball anywhere, and Haaland knows the route to goal.

The signing of De Ligt is a major boost for Bayern Munich in their quest to win the Champions League again.

The Dutch defender had a breakout season with Ajax in 2019, but the past years with Juventus have been middling. De Ligt has the chance to become one of the best centre-backs in the world and Bayern are the perfect place.

Bayern Munich have signed Mathys Tel as the striker of the future who is just 17! Here’s why he is such a special talent

He will be first-choice alongside Dayot Upamecano, who had a brilliant 2021-22. It is true that Bayern have little competition in the Bundesliga, but their strong team performances have always been complete.

More than 60 goal contributions between them surely have them as one of the best duos in football right now. Benzema was in irresistible form as Madrid won the La Liga and Champions League double.

He scorched the Spanish league, and inspired comebacks galore in Europe. Vinicius Jr. was the perfect sidekick whose incredible pace and trickery bamboozled defenders.

Madrid are extremely content with what they saw, and the return to form of Eden Hazard will be a bonus. There is no doubt that they will go for all the silverware available once again.

The pair that led Inter to the Scudetto in 2021. 41 goals and 17 assists between the pair with Lukaku being the league MVP.

Inter finished second in 2021-22, and Lukaku has now returned after a doomed season with Chelsea. The familiarity of the surroundings and the upgradation of the side will certainly work in their favour.

While they may not be the most glamorous of pairs, Lukaku and Martinez are definitely one of the best duos in football on song together.

There are extremely high expectations the two new signings for Barcelona. Lewandowski had been the best number 9 in world football since his move to Bayern Munich. He regularly produced absurd scoring numbers that were hard to believe.

It is incredible that he still has not won a Ballon d’Or! Meanwhile, Raphinha has evolved into one of the best jugadors when it comes to silky play.

The Brazilian can do wonders with the ball, and his golazo against Real Madrid in preseason shows there is plenty in the tank. Xavi will be pleased to have so much attacking talent as they aim to chase down Los Blancos in La Liga.

The best attacking fullback duo in football. Liverpool have refined each of them to such an extent that their participation in the final third is paramount.

Jurgen Klopp knows the importance of the pair as they contributed 22 assists in the Premier League in 2022. With a new targetman in Darwin Nunez, there is no doubt a lot of balls will be funnelled through to him.

The fact that Alexander-Arnold and Robertson can cross from all angles and are deadly from setpieces is also a bonus. No doubt, Liverpool’s success in 2022-23 will heavily depend on their fullbacks keeping up their world-class form.

Yes, the Parisians have a front three, but Mbappe and Messi could be the most integral parts. The Frenchman is the successor to the throne, while the Argentine legend has promised a new him in 2022-23.

PSG have been chasing the Champions League for forever, and the coming season looks like the perfect time. Christophe Galtier has arrived in one of the most astute recruitments by new sporting director Luis Campos.

Mbappe knows the league inside and out, with his overall play impossible to contain. Moreover, Messi has become a playmaker as well as remaining an elite goal scorer. Therefore, it will be superbly exciting to see what happens now.